Is there to much inert solids in your sludge?

Do you have to raise your pH when using a coagulant?

Magnesium Hydroxide as a Coagulant

When Magnesium Hydroxide is added to a wastewater stream it’s most obvious benefit is to increase the pH and Alkalinity through the controlled release of hydroxide (OH–).  Less obvious are the coagulation benefits provided by the divalent Magnesium cation (Mg2+).

The effect of increasing charge density is shown with the decreasing sizes of the sodium (Na+), magnesium(Mg2+) and aluminum (Al3+) ions.  Due to it’s large size and low charge, the sodium ion (Na+) does not possess coagulation properties.  Alternatively, the aluminum ion (Al3+) has a high charge density making it very usefully as a coagulant, in such products as alum and poly aluminum chloride.

The charge density of the magnesium ion (Mg2+) is between that of Na+ and Al3+, resulting in many wastewater applications that show coagulation benefits.  In such instances, the customers enjoy both cost savings from replacement of caustic soda, as well as a reduction in polymer usage in solids dewatering.

A major issue with Al3+ based coagulants s that they are typically acidic and, as a result, depress the pH and consume alkalinity when used.  Magnesium Hydroxide provides an alternative to this depressed pH by simultaneously providing coagulation with an alkalinity boost. 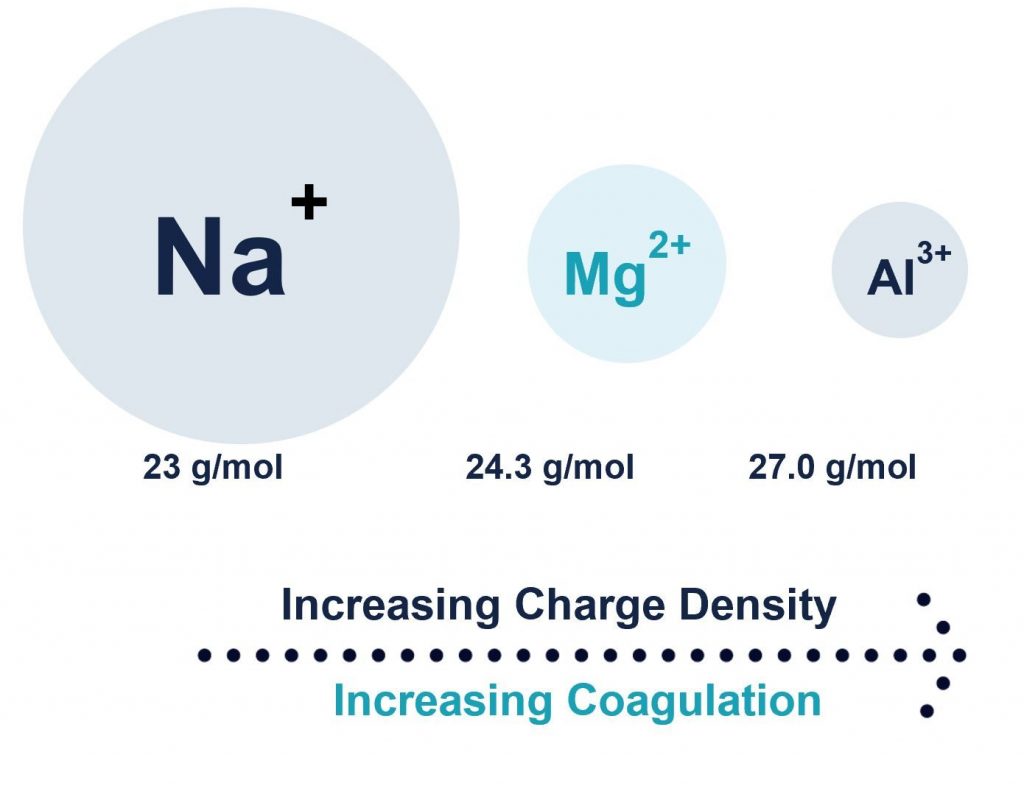 ALKA-Mag+ (60% Mg(OH)2) has a higher neutralizing value per pound than any other alkaline additive.  This translates into a 40% reduction in chemical usage when compared with caustic soda, while being significantly safer for operators to handle and more nutritive for the microorganisms being maintained – making it the most cost-effective option.

Magnesium is a macronutrient, the core element in chlorophyll that makes everything green – while sodium is a salinity hazard

Non-hazardous for employees to handle, corrosion free, spill is not reportable

Manage your wastewater without compromising your people, your operations or the earth.

GOT A QUESTION? WANT A QUOTE?

Want to schedule a chat with one of our technical sales managers?

Or use the form below, we’ll be in touch soon.

Because we truly care about sanitation

Almost 2 billion people do not have a decent toilet or access to basic and safely managed sanitation. In many cases, faeces and urine end up untreated in the environment, contaminating it and threatening people’s health.

This is why IER supports WaterAid programs, to facilitate access to safe water, sanitation and hygiene in the world’s poorest and most marginalised communities.

IER NEWSLETTER
Get the latest news, customer stories, and R&D updates delivered to your inbox.