Trying to determine how to improve wastewater sludge dewatering and compaction can be a very complicated process.

The root cause of the problem can be anything from an undesirable biological process to a chemical imbalance.  Biological process upsets can be varied, from an over-abundance of filamentous bacteria to the lack of a diverse microorganism population.  Chemical imbalances tend to be centered around factors that affect the charge on suspended solids, such as swings in TDS  (total dissolved solids) and conductivity, pH and alkalinity, as well as the balance of mono-, di-, and tri-valent ions in your wastewater.  Ultimately, whatever the cause, wastewater operators always strive to make improvements in coagulation of suspended solids that will lead to better sludge compaction.  In this article, we will explore the concept of how Magnesium Hydroxide can play a role in improving the valance balance of the wastewater.

Let’s first take a moment to understand the basic chemistry of mono-, di-, and tri-valent ions.  Mono-, di-, and tri- refers to the charge (valence) of the ion.  For example, the sodium cation (Na+) is a mono-valent ion, having a single positive charge on it’s nucleus.  The magnesium di-cation (Mg2+) has two positive charges, and the aluminum tri-cation (Al3+) has three positive charges.  The higher the charge (valence) on any ion, the higher the charge density of that ion.  An increase in the charge density makes the ion more like a magnet, meaning that the ion has the ability to bond strongly to negatively charged (-) particles. 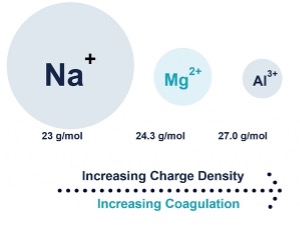 The image to the right shows the effect of increasing charge density on the size of the sodium (Na+), magnesium (Mg2+), and aluminum (Al3+) ions.  While each of these metal ions weigh about the same (24 to 27 g/mole), the increased positive charge in the nucleus of the aluminum ion has a dramatic effect on pulling in the electron cloud and shrinking the ion’s size.  Therefore, the Al3+ ion is much, much smaller than the Na+ ion, making the charge density of the Al3+ ion much greater.  Due to its large size and low charge density the sodium ion (Na+) does not possess coagulation properties.

Nearly all salts containing sodium are highly water soluble, meaning that the Na+ ion has very little strength to hold onto a (-) particle.  As a result, high levels of sodium in wastewater can cause a reduction in solids settling and compaction.  Alternatively, the aluminum ion (Al3+) has a very high charge density making it very useful as a coagulant in well-known products such as alum and poly-aluminum chloride.

The charge density of the magnesium ion (Mg2+) lies between that of Na+ and Al3+, resulting in many wastewater applications that show significant coagulation benefits from the use of Magnesium Hydroxide, resulting in improved dewatering and sludge compaction.  For this reason, the replacement of Caustic Soda for pH control with Magnesium Hydroxide, replacing Na+ with Mg2+, can have the side-benefit of improving sludge dewatering and compaction.

A key distinction of Mg2+ and Al3+ for solids compaction is that common Al3+ coagulants, such as alum or polyaluminum chloride, are acidic products (as are Fe3+ based coagulants).  Therefore, feed of these products into the wastewater system can consume alkalinity resulting in the need to feed a subsequent alkaline additive.

The feed of Mg(OH)2 does the opposite – boosting the pH and alkalinity while simultaneously releasing the Mg2+ ion to aid in solids compaction. However, just as with Al3+ and Fe3+ based coagulants, sometimes significant positive effects are observed with Magnesium Hydroxide feed and in other instances there is little to no effect.  This inability to predict Mg2+, Al3+, and Fe3+ coagulation performance likely stems from differences in microbiological diversity of the sludge or the pH, conductivity, and chemical composition of the sludge being treated.

Most suspended particles in food processing and municipal wastewater sludges are negatively charged ions, often having multiple negative charges present on each particle.  Picture a ball of string with multiple (-) sites located all along the string. The attraction of these negatively-charged (-) ions with high charge density (+) cations can result in charge neutralization and strong ionic bond formation – which is what results in the formation of strongly flocculated particles (“flocs”). 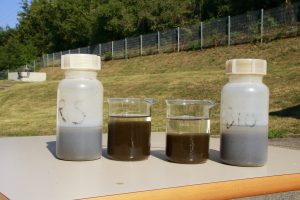 By combining and becoming mostly neutralized, these flocs continue to grow as they encounter other (+) and (-) ions in the wastewater.  As they grow, water molecules loosely bound to the ions are released, resulting in more dense flocs that are easier to dewater in a centrifuge or press.

In summary, effective charge neutralization is the primary mechanism that wastewater operators seek to exploit when trying to improve sludge compaction.  Increasing the balance of di-valent and tri-valent cations in the treated wastewater will aid in capturing and dewatering the suspended negatively charged particles that make up the great majority of the suspended solids in the system.  One simple way to improve this balance is to replace the use of Caustic Soda (NaOH) with Magnesium Hydroxide (Mg(OH)2) for wastewater pH and alkalinity control.  This reduction in Na+ and increase in Mg2+ will provide a more multi-valent ions for charge neutralization, floc formation, and sludge compaction.

GOT A QUESTION? WANT A QUOTE?

Or use the form below, we’ll be in touch soon.